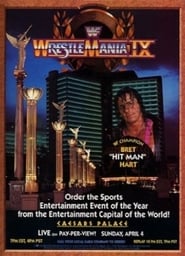 WWE WrestleMania IX was the ninth annual WrestleMania.. The event took place at Caesars Palace in Las Vegas, Nevada on April 4, 1993 and was the first WrestleMania event held outdoors. WrestleMania IX was built around two main storylines. The first was the seemingly unstoppable Yokozuna challenging Bret Hart for the WWF Championship, a right he earned by winning the 1993 Royal Rumble. The other major storyline was the return of Hulk Hogan, who had departed the WWF following WrestleMania VIII but returned to team with Brutus Beefcake against the WWF Tag Team Champions, Money Inc. Several reviewers have been critical of the event. The most frequent criticism has been related to the match between The Undertaker and Giant Gonzalez, Hulk Hogan's win, and the Roman togas worn by announcers. Both the pay-per-view buyrate and the attendance for the event dropped from the previous year's WrestleMania.

Ed Leslie
"The Mouth of The South" Jimmy Hart